The history of the Taunus.  About a  month ago I recieved an e-mail from a Swedisch guy with the complete history of the race Taunus. He actally built the race Taunus and even today he writes with great enthousiasm about it. And I must admit, he did a great job, must have cost countless hours. Even the home paintjob looks great after so many years. Apart from some mechanical things we wont change the appearence. I will keep it as he built it! It looks awesome!

Here is what he wrote to me:

Hello Wille!     Here comes the story of the Taunus!
In 1967 the car (the roof) was sold to a man in Ronneby who worked in a electric company, it was then silvermetallic 2,0 v6 engine and floorshifter. As far as we know he kept it to 1975-76 when he replaced it  at the Ford-dealer for a new car. At that time my friends brother named Berne Josefsson worked as a mechanic there and he bought the car. He used it daily drive some years and he repaired some rust and repainted it solid gray. When his brother Joackim Josefsson got his driverslicense in 1981 he got the car from Berne. In winter 1984 when Jocke and another friend,Jörgen Jansson, drive home from saturdaynightdance it was very slippery and they lose control and had an accidet into a three.After that the car was put behind the barn at Jockes parents home. 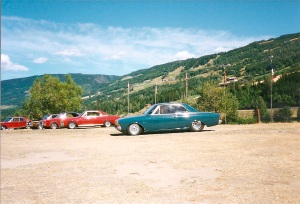 In 1994 I searched for a objekt to build a new racecar. I  was drive a 1953 Volvo Pv with 16valve turboengine and wanted something lower and longer,actualy I was trying to find a 1965 Opel Rekord coupe but at the time I could not find any. One day I visit my sister,her neigbour had a 20m ts and when I saw it I remembered Jockes hardtop. So I called him and yes,he still had it behind his barn. He had a plan to repair in the future so he also had an empty body from an 17M -65 becouse the hardtop was in realy bad condition.There had been some teenager wanted to buy the cars but he did not think they could do a good job so he would not sell it to them. He liked the idea to turn it into a racecar and knew I always finish what I start and had the “Know how”. I was at that time working with accidentcars at Saab, so i get to by it all for 500sek. So in oktober 1994 me and some friends carryed the empty 17M body into my garage and I started to build the chassis. The hardtop was in realy bad condition, it had been standing in grass for 10 years, so bad that when I bring it home on my wagon the susspension brake down by rust so we had some problem to get it off the wagon. The parts that was special for the hardtop get a new home on the 17M body and then I found out that there no longer was any paper on the hardtop! The lisencenumber now belonged to a big truck in north Sweden and normaly I could get an ID-check with help from the police but with only the roof from the original car that was no option.. I needed identity on the car to be able to drive in the right dragraceclasses so i bought a 1965 20M ts and used the papers and some other parts,and thats why it does not says “hardtop” in the papers. The car was finished springtime 1996 and all the work had been done all by me,included the paintwork with some advise and help from a friend who is proffesonal car-painter.The color was supposed to be an original green color from 1967Ford but somthing went wrong when they mixed the color, but I tought it looked even better this way.

Anyway it could couse you some problems if you want to keep the color and need to repaint some parts.   Engine, Doug-nasch gearbox  and 8 3/4 rearaxel I used from my old Pv and front susspension i build with parts from volvo240,opel kadett C and VW Golf. I went racing some years with the car and it worked good,but i had about 600-650 horsepower and you have a lot more so there is a big difference!
In 1997 I was invited as a special  guest to a big meeting in Norway with the Ford M club and they wanted some rubbersmoke,maybe not quite legal in a camping area, but offcourse they get some! They liked the car very much but they cold not understand why i did not use a Ford engine! I think you understand!  In 2005 i had divorce and needed money to pay the lowyer so in,I think it was springtime 2007, I sold the car to Clabbe without gearbox and engine. The picture you have with the car on a wagon outside my red garage is when he bought it .Clabbe was the right person to take over and he make the car even better,but i can tell you,after all that work it did not feel good to se the car leave my garage! And here starts your story! !    Janne Håkansson 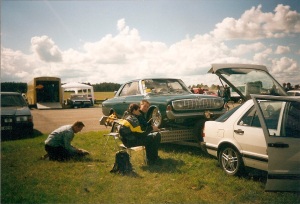 Taunus Back on Track doneer € 25 nu 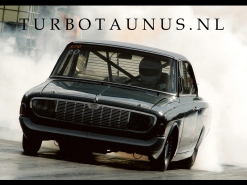